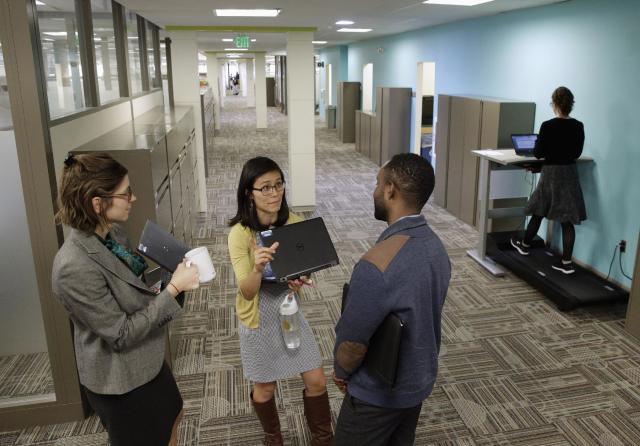 WASHINGTON (AP) — They work for the government and even their closest relatives have no idea what they do. It’s not because they’re spies or nuclear scientists, but because their jobs are so arcane: trying to reinvent Medicare to improve it, and maybe save taxpayers money.

In a sprawling, nondescript office park near Baltimore, some 360 people at the Center for Medicare & Medicaid Innovation are trying to change the health care system, using the government’s premier insurance program as leverage. If they prevail, the U.S. may no longer have the worst of both worlds: unsustainable spending and unenviable results.

“I want Medicare to exist not just for my mother, but for me and my kids,” said the director, Patrick Conway, 41, a pediatrician who also serves as Medicare’s chief medical officer.

At the center are doctors, lawyers, health policy experts, and career Medicare employees. Many came from outside government. They’re somewhat younger than Medicare’s core staff. Some have seen how parents and grandparents can be harmed in the nation’s disjointed health care system.

The center’s physical layout is meant to encourage discussion and debate. Meeting rooms have walls you can write on to diagram ideas. Laptops are at every meeting, but for thinkers who like to have a toy in their hands to play with, there’s a cigar box with colorful dinosaurs in one conference room.

The innovation center can’t yet claim it’s saving Medicare from extinction. Its experiments have produced modest results that on balance are encouraging. The center is in its sixth year, and its influence is starting to be felt throughout Medicare in areas from joint replacement surgery to cancer treatment and front-line primary care, which remains a principal focus.

Medicare started out as an efficient bill-paying service that asked doctors and hospitals few questions. Lawmakers eventually realized that was a path to financial ruin, and they turned to blunt cuts that caused new problems. The idea now is to use Medicare payments to create financial incentives for doctors and hospitals to work together, helping patients avoid costly hospitalization whenever possible.

That might mean paying a primary-care practice to hire a clinical coordinator who keeps tabs on patients with chronic illnesses. It could mean holding hospitals accountable for the overall cost and quality of joint replacement surgery, to encourage attention to rehabilitation. Successful experiments can be adopted as permanent policy without seeking approval from Congress.

Because the center was created by President Barack Obama’s health care law, its future under a Republican president is questionable. But Republicans would be wise to keep the center running, said Mark McClellan, the Medicare chief under former President George W. Bush.

“The authority to try out and then expand successful models of Medicare reform is a very useful capability,” he said.

A Republican administration might do more to engage Medicare beneficiaries to bring about change, McClellan said. That could involve offering financial rewards for healthy behavior. Right now very few of Medicare’s 55 million beneficiaries have any idea that changes they’re starting to see are part of a deliberate effort to remake the traditional side of the program.

Back at the center, adult medicine specialist Hoangmai “Mai” Pham serves as a kind of problem-solver-in-chief, working with different project teams to identify and resolve common issues. Her work is also guided by personal experience.

Pham has been closely involved with “accountable care organizations,” or ACOs. That’s a major effort to set up networks of hospitals and doctors that work together, striving to keep patients healthier and meet quality and cost goals.

At first, Pham found it stressful working with medical practices around the country making the transition to a model of accountability, with payment hinging on results. “You need to build up a lot of trust,” she said. A key was providing access to Medicare data that gave the practices a comprehensive view of their patients.

Now Pham says she’s had doctors tell her, “this is what we always wanted to do.” About 9 million beneficiaries, or close to 1 in 4 of those with traditional Medicare, are currently in ACOs.

Among the center’s more than 60 experiments:

—A “Comprehensive Primary Care Plus” initiative that will involve 5,000 medical practices. They will get upfront payments to coordinate care.

—A change in the way Medicare pays for drugs administered in a doctor’s office, including chemotherapy. Medicare says it wants to reduce incentives for doctors to prescribe the most expensive drugs. Cancer doctors are opposing the proposal, which is still open for public comment.

—A program started this month that holds hospitals in 67 major metro areas accountable for costs and quality for hip and knee replacements, the most common inpatient procedure for Medicare patients.

For Pham, it was the death of her grandmother that drove home what needs to change in health care.

Pham said her grandmother was a tiny woman who escaped from Vietnam to the U.S. in 1975, widowed in the war and left with six children. Over the years, her grandmother came to have 21 grandchildren here, eight of whom became doctors. But when she died of heart failure in 2004, poor medical coordination was behind it.

Her grandmother suffered from dementia, Pham said. Somewhere along the line, clinicians and family lost track that she also needed to be medicated for a thyroid problem. She stopped getting her thyroid medication and that eventually precipitated the heart failure.

“We all felt incredibly impotent and incompetent as a result,” said Pham. “If this can happen to someone so dearly beloved, and with eight physician grandchildren, there are so many holes in the system that I don’t know where to begin.”